Travis Pastrana, 26, cleared the revolving chopper blades by about four metres but the 14-time X Games medallist said it was a closer call than he would have liked.

"That was a little outside of the box. I didn't know what to expect with the wash and the wind, there was a little bit of turbulence up there I wouldn't recommend it to anyone," Pastrana told national newswire AAP.

"The wind affects the bike more than the rider as the bike can take a mind of its own up there and if you lose focus then you can land short."
Pastrana's stunt was aimed at promoting the MTV extreme sports series Nitro Circus, which will be filming in all of Australia's state capital cities in May and June 2010 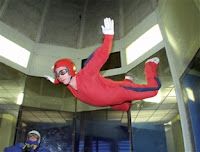 Fancy yourself as a bit of a daredevil? Check out these Virgin Experience Days - BodyFlying Discovery for 1 is only £49.

Groves beat Marianne Lumb and Daniel Graham in last night's final. In their last challenge, all three chefs had to cook a three course meal for judges Michel Roux Jr and Greg Wallace.

The 28-year-old's winning menu included a starter of roast quail with scotch egg, morels and asparagus and a main of venison loin with potato rosti, watercress puree and roasted beetroot. His pudding was a mille feuille of raspberries and bitter chocolate with lavender and honey ice cream.

"Steve has all the talents required to make it to the top," said Roux Jr.

Wallace added: "I have absolutely no doubt that Steve is going to go on and have a very glittering career and will be a serious player in the culinary world."

The Essex-based cook has vowed to "become the best chef" and wants to run his own restaurant serving British food.

Have a love of baking? check out this fantastic 5-piece Silicone Bakeware Set, available in Red and Green Was £49.99 Now only £19.99.
Email ThisBlogThis!Share to TwitterShare to FacebookShare to Pinterest

Pupils at a high school in Sheffield have been told that they will soon be able to use their mobile phones in the classroom.

According to the Daily Express, staff at the Notre Dame RC School have decided that students' progress will be benefited if they are permitted to use the various additional features of their phones in lessons.

It is thought that the school has defended its surprise move by claiming that it is no different to when calculators were first introduced in the classroom.

Assistant headteacher Paul Haigh told The Daily Telegraph: "We realise as a comprehensive state school we could never afford to buy every student all the IT and mobile devices we would like them to have.

"But most students own many of these devices anyway - they're just hidden in their schoolbags. What's more they're experts in using them, knowing all the short cuts and characteristics of their own equipment as they use it every day."

However, one angry parent is quoted as saying: "How will teachers keep tabs on what their pupils are up to on tiny screens?"

Chris Keates, general secretary of teaching union NASUWT, added: "No-one would disagree that we want technology to enhance children's learning, but there are other ways of doing it."

The new scheme is expected to come into practice later this month.

For the latest in mobile phones and audio-visual, take a look at http://www.24ace.co.uk/.

Kylie Minogue is set to follow in the footsteps of Dame Shirley Bassey and Celine Dion by staging a Las Vegas residency.

The Aussie pop star has been thrilling fans in the US this month, with her first North American tour.

And the Spinning Around hitmaker has been approached to perform a string of shows in Sin City when her current trek finishes, according to her sister Dannii.

She tells the Daily Mirror newspaper, “The response from her shows in America have been phenomenal. They love her out there. She was nervous about going over for the first time, but it has gone better than she expected.

“She has now been asked to take the show back to Vegas and extend it as a residency over there. I’m so proud of her. Kylie’s show is perfect for Vegas, it’s so theatrical. She has loved performing out there.” 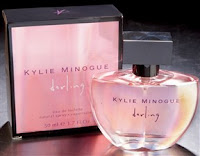 The 41 year old performed to a sell-out crowd in Vegas at the weekend, delighting celebrity fans including Paris Hilton and Doug Reinhardt.
Love Kylie? Love her Perfume? This Kylie Minogue Darling Perfume is only £26.99
Email ThisBlogThis!Share to TwitterShare to FacebookShare to Pinterest

The singer, who hails from London and is a graduate of Guildford's Academy Of Contemporary Music, will release her self-titled debut album on November 16.

The record has been produced by Mike Hedges and includes her own versions of 'How Can I Keep From Singing' and Take That's 'Rule The World' sung in Italian.

"Her voice is a unique and powerful instrument," Barlow said. "I was instantly captivated by it."

Barlow recently admitted that he was more nervous about

launching his new label than performing with Take That at Wembley arena.

Kerslake releases her debut single 'Moved Through The Fair' on November 2.

Listen to all of your favourite hits on this Sony 16GB OLED Walkman only £219.99
Email ThisBlogThis!Share to TwitterShare to FacebookShare to Pinterest

The former star of The Hills has set up her own production company, called Blue Eyed Girl Productions, and will be the executive producer on the movie.

Her book, about reality star Jane Roberts, has been on the bestseller list of The New York Times for 14 weeks, Variety reports.

LA Candy tells the story of a 19-year-old who moves to Hollywood and has to deal with being in the public eye after quickly finding fame in a reality series.

A spokesman for Temple Hill Entertainment, which has the rights to make the film from the book, said: "Lauren, who became an icon in that reality show world, came to us with a structure of how to tell the story in an interesting fashion, that was separate and apart from the book.

"We loved her take. Her book is an honest portrayal of what it must be like to set out to be normal, then sign on to become famous and eventually realise, wow, this isn't at all what I'd planned for myself."

Lauren's film deal comes during the same week she launched a line of clothing that is being sold exclusively at Kohl's.

Check out the fantastic range of clothing and footwear available at 24ace.co.uk. This Leopard Print Faux Fur Jacket by TG was from £60.00, now from only £29.99.
Email ThisBlogThis!Share to TwitterShare to FacebookShare to Pinterest
Newer Posts Older Posts Home
Subscribe to: Posts (Atom)