Sean Bean spent a night in the police cells on Thursday, after it was alleged he was involved in a domestic assault.

Police were called to the couple's home in London after it was claimed the Lord Of The Rings star attacked his fourth wife, Georgina Sutcliffe.

However, the Sheffield-born actor was released on bail on Friday after being told that no further action would be taken against him.

Speaking to the Sun, Ms Sutcliffe said: "Everything is OK. Sean and I are at home enjoying the sunshine. He was arrested. Everything was blown out of proportion.

"The police held him quite a while, but Sean is fine and I'm fine. There's no problem between us."

A Scotland Yard spokesman said: "A man was taken to a police station and bailed on Friday morning.

The couple postponed their wedding in January less than 24 hours before the service due to "personal reasons".

Watch Sean in his best roles on a DVD Player from Ace.
Email ThisBlogThis!Share to TwitterShare to FacebookShare to Pinterest

Duchovny: I wouldn't be Doctor Who

David Duchovny has said he would not be interested in playing the role of Doctor Who if David Tennant quits.
The X-Files star will soon be seen on the big screen in I Want To Believe – the movie version of the popular US sci-fi series.
However, the 47-year-old actor admits he is a big fan of the long-running series which follows the escapades of the famous timelord.
Speaking to the Daily Star, he said: "I love Doctor Who and I remember the first one, which was wonderful in its low-tech quality.
"I also loved the theme song, which sounded like The Cure to me."
He went on to say that he would be more interested in playing one of the shows notorious villains.
"Who's the bad guy? The Dalek? OK, I'll play him," he says.
Duchovny has recently enjoyed success with the hit show Californication, in which he plays a struggling writer in Los Angeles.
Catch up with the doctor, with these gifts.
Email ThisBlogThis!Share to TwitterShare to FacebookShare to Pinterest

It has been rumoured that Kelly Osbourne may be engaged after being spotted with a large ring on her finger.
The 23-year-old daughter of legendary heavy metal star Ozzy Osbourne recently revealed she was in a relationship with model Luke Worrell.
Kelly is something of a rock chick, having previously been linked to The Used singer Bert McCracken and Son Of Dork guitarist David Williams.
Things could be a little more serious with Luke, however, as he was recently seen with former X-Factor star Sharon Osbourne in Los Angeles – fuelling speculation that he may have been asking permission to marry her daughter.
Commenting on her relationship with Luke, Kelly said: "We get on so well together. I really do love him.
"Every time we are in each other's company, we always have a good time."
Elsewhere, McFly star Danny Jones recently revealed that a romantic evening between himself and Kelly was thwarted by her father Ozzy.
Getting married? Take a look at these Wedding Invitations
Email ThisBlogThis!Share to TwitterShare to FacebookShare to Pinterest

Drew Barrymore has split from her toyboy lover Justin Long after dating for less than a year, it has emerged.

The split had been unexpected given that they had both recently claimed to be happy with the relationship.

Barrymore, 33, had been friends with the 30-year-old Long for seven years, but romance blossomed when they were both filming romantic comedy He's Just Not That Into You last August.

Speaking to Vogue magazine in March, the ET star said: "I'm so happy my cheeks hurt."

A joint appearance on the Oprah Winfrey show in March saw Long proclaim: "She's the most compassionate person I've ever met."

Barrymore has already been married twice – once for five weeks to Welsh bar owner Jeremy Thomas and then to comedian Tom Green for 15 months.

She has also had a five-year relationship with Strokes drummer Fabrizio Moretti, as well as dating actor Luke Wilson from 1996 to 1999.

Watch Drew in all her best roles, with a DVD Player from Ace.
Email ThisBlogThis!Share to TwitterShare to FacebookShare to Pinterest 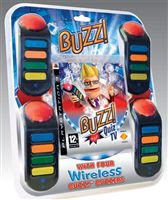 Its here! The game that turns your living room into a game show! This is the first of the Buzz games that has been released for the Playstation 3. The game uses the PLAYSTATION Network to offer you the chance to quiz against people around the world, and even write your own quizzes.

The game comes with 5,000 questions on the disc and the option of downloading thousands more.

The Aussie songstress was awarded an OBE for services to the entertainment industry from Prince Charles at Buckingham Palace last week.

It appears the UK has taken to the 40-year-old star after her much-publicised battle with breast cancer.

She held off competition from veteran broadcaster Terry Wogan to take the number one spot in the survey.

The Metro recently reported that a man who was planning to commit suicide had a change of heart after hearing Kylie's song On A Night Like This.