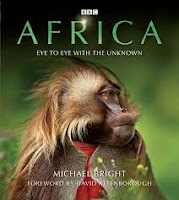 David Attenborough’s new documentary series, Africa, has been a monumental success. Its advanced CGI camera techniques, moving soundtrack and emotional depictions of nature at its cruellest have opened our eyes to the true beauty and majesty of the world’s most vibrant and diverse continent. To complement the series and give you an even deeper understanding of the wildlife of Africa, a new book has been released under the same name; Africa: Eye to Eye With the Unknown. To celebrate the release of the book and the success of the series, we’ve compiled a list of the 5 weirdest animals in Africa! Brace yourself; some of them are a bit odd.


What do you call something that has the body of a horse, the limbs of a zebra and the head of a giraffe? An Okapi, that’s what. Unlike other herding animals, Okapi prefer to spend their lives in sombre isolation, which isn’t a surprising fact when you think about it. They’re not stripy enough to hang with the zebras, they’re not tall enough to chill with the giraffes and they live in the wrong part of the world to be knocking about with horses. These confused beasts have even been known to ‘moo’ like cows when greeting each other. They don’t know what they are! I can’t help but feel that God was running out of ideas when he created the Okapi, so he just decided to splice a load of random animal parts together in the hope that something interesting would come out. It did.


There aren’t many words you can use to describe Pangolins. They look like the first sketch of a new Pokémon that the creator never got round to finishing.  Pangolins are covered in a protective shell of scales, which not only looks unsightly, but also accounts for 20% of their weight. Imagine running around all day whilst wearing a suit of medieval armour; that’s probably how a Pangolin feels. Unsurprisingly, Pangolins are nocturnal, meaning they only come out at night. Why? Maybe they’re just darn embarrassed to be seen in the daylight. All joking aside, Pangolins are actually quite cool creatures, which are in danger of becoming extinct due to illegal trade and destruction of habitats.


First of all, which lazy person named this animal? Surely they could have come up with something a bit more original? It’s like calling a leopard a giant spotty cat, or calling a piranha a violent goldfish. Anyway, the bat-eared fox can be found in southern and eastern Africa in the grasslands and semi-deserts. Interestingly, a female only has 4 nipples, which sadly means she may have to kill some cubs if she gives birth to more than 4. But what’s with the giant ears? Well, they’re full of blood vessels that get rid of heat and help keep the fox cool in the sweltering African climate. Bat-eared foxes are nocturnal and will often travel up to 8 miles every night in search of food. That’s some serious commitment right there.


Now this is a good name! None of this bat-eared fox nonsense. Bush babies are the smallest primates in the animal kingdom, measuring in at just 7/8 inches in height. Their tails, which are bigger than their bodies, help them leap through the trees at night to catch prey and avoid predators. When someone describes a bush baby, most people conjure up an image in their mind of some cute, fluffy teddy bear like creature. However, to me, they look like the spawn of Satan. When I picture the gates of hell, I imagine bush babies swarming everywhere. Their unnerving appearance isn’t helped by the high-pitched cries and shrill whistles which they let out either. They also enjoy marking their territory with urine. Not so cute now, eh?


Imagine having a shoe hanging off the end of your face all day, every day. That’s no way to live. Despite its comedic appearance, the shoebill has quickly become a figure a hate after The BBC documentary series, Africa, showed a female shoebill feeding and caring for one of her chicks and leaving the other one to die a slow, painful and malnourished death. There was a mass outcry of pain and emotion after the episode aired, with many people claiming they had to ‘stop eating their dinner.’ Oh the horror. It’s just nature! Who are we to question how ol’ shoe face treats her young? Shoebills are magnificent birds with enormous wingspans and can grow up to 5 feet in height. You’ll find them in the tropical swamps and marshes of central and east Africa.