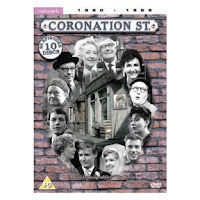 Coronation Street's writing team have been honoured at this year's Writers' Guild of Great Britain Awards. The annual ceremony, which took place on Sunday evening at the Free Word Centre in London, celebrates the best scripts of the year across all platforms, including TV, film, theatre, radio and video games.


Speaking about their success, Harvey told DS: "The Coronation Street writing team are thrilled to accept this award and it's doubly thrilling as it's voted for by our peers. We'd like to thank our producer Kim Crowther, the series editor Louise Sutton and all our fantastic script editors and storyliners for giving us the support to allow us to tell the stories we want to tell five times a week, 52 weeks a year... and counting!"

If you're a fan of Coronation Street and the fantastic one liners - get your hands on these classic episodes from the 60S, 70S & 80S.
Email ThisBlogThis!Share to TwitterShare to FacebookShare to Pinterest
Newer Post Older Post Home